Beer Collaborations…Let’s Try Something New
Posted by: THFBeer_nate on September 27th, 2010 with 9 Comments 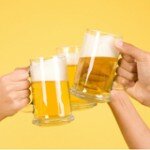 Back when I arrogantly considered myself a musical maven, I remember growing so tired of the endless collaborations that were inundating the music industry…namely the pop music industry.  If one’s career was adrift in the doldrums of consumer yawns and poor record sales, the solution was to finesse a way into the studio of ex-boy-band-member, the I-don’t-cuss-too-much-rapper, or the I-don’t-write-my-own-music-but-am-hot-and-use-a-lot-of-vibrato chick.  While it worked for Santana and appeased the masses, I found it boring.

All that to say, there are a heck of a lot of collaborations going on the craft beer industry, and for the most part, I’m bored with them.  Some, I can appreciate, like Avery/Russian River’s Collaboration Not Litigation Ale, as it has a good story behind it.  Usually though, the beers that emerge from such collaborations strike me to be more about creating a marketing buzz (as in the music industry) than anything.  Nonetheless, it is one of the few marketing strategies proprietary to the craft beer industry.  Can you imagine if Bud and Coors hooked up for a collaboration?  I imagine it would taste a lot like a bland watery pilsner.

Despite my boredom and slightly suspicious attitude regarding craft beer collaborations, as a homebrewer, I try to give the guys living my dream credit, that underneath the desire for shelf recognition they are really pumped up about brewing a batch of beer with a peer.  As a homebrewer, I am always geeked up about collaborating with another homebrew, and obviously, since the beer will child of such collaborations will never hit the market.  This coming weekend I’ll be collaborating with a buddy I haven’t seen in years.  I am giddy with excitement, especially since I’ll be given the opportunity to not only collaborate with him, but walk him through his first all grain batch.

As I was daydreaming about the recipe, it suddenly occurred to me that it would be a great idea for a craft brewery to take a break from the now glut of craft-brew-superstar-collaborations, and plan a collaborative brew with a no name home brewer.  I’d be more inclined to buy a bottle of DogfishHead & Joe Schmo Homebrewer Collaboration than Dogfish Head and Other Big Craft Brewer Collaboration.

Sure, as a homebrew, I am biased.  I get a bigger kick out of trying a buddies homebrew than I do from tasting a super rare brew that cost an ungodly amount of currency.  But, since nearly every brewer’s vocation started in the kitchen it seems a worth tribute. To some extent, this has been done.  I know that Sierra Nevada collaborated with Charlie Papazian.  I thought it was a great idea, and even bought a bottle, enjoying it thoroughly.  I’m just waiting for a brewery to pay their respects to a little less household name.

What you think…good idea? Bad idea?  Home brewers…any great collaboration stories?  Am I the only one getting bored with all these big craft breweries getting together for collaborations?B