Wedding Beer
Posted by: THFBeer_nate on September 30th, 2009 with 19 Comments

In the world of gift giving, for the beer geek, beer is a double edged sword; that is, it serves as the perfect gift for the geek, as well as the gift of choice to be given by the geek.  So when a friend of mine announced that he was marrying his long time girlfriend, I knew that I would be giving him home brew for the reception, for several reasons.  (1) I am bound by beer geek law to give nothing but beer to friends and family till the day I my body lies in the grave, (2) my friend is an avid craft beer enthusiast, (3) the cost reduction of brewing beer at home gave me a bigger bang for my buck (I could have bought him a $45 stock pot, or 50 bottles of quality beer) and (4), doesn’t wedding beer usually suck?

It is interesting to note that beer is a gift that keeps on giving.  The majority of my brewing equipment was a gift from my dad, and has already yielded gifts to friends, family, and guys embracing the vows of marriage!

Initially, I was going to brew up a Hefeweizen, so as not to offend any delicate taste buds of guests at the wedding.  Somehow I gave into the creative whimsy and joy of brewing beer and developed two unique recipes.  The first beer is my take on a Dunkel Weizen, with extreme porter qualities, and slightly above average hop quantities.  The second beer was slight spin on Roggenbier (an awesome style American brewers should consider adding to their line up) that utilized more darker grains than average, and slightly more rye malts.  Both beers utilized 2 different Bavarian strains of yeast.

I developed these because both the bride and the groom love darker beer, I didn’t want to abandon wheat as an ingredient, and I really love brewing beers outside of style boundaries.  The beer turned out awesome, and I had a decent bottle yield.

I brewed both of these beers in one day.  Both were all grain recipes.  Even though two buddies pitched in for both the labor and the cost, until I can upgrade to some better equipment I doubt I’ll attempt more than one brew in a day again!

Of all the beer I have brewed, I have never created labels.  It’s what’s inside the bottle that counts, right?  Since this was for a friend, and because more people were going to be drinking my homebrew than ever before, I wanted to dress these brews up.  With a little Photoshop magic, what you see below covered the bottles. 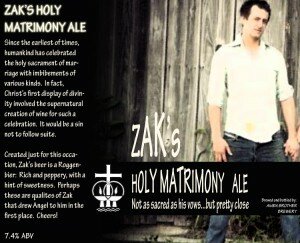 The beer for the groom (Zak) I called Zak’s Holy Matrimony Ale.  For the bride (Angel) it was Angel’s Holy Matrimony Ale.  When the bottles are placed side by side, a complete picture of Zak and Angel holding hands is formed. Like any home brewing nerd I penned a faux brewery name; I had many ideas to choose from.  They loved it.

My ego and I loved it too. Folks I had never met were coming up to me and shaking my hand saying it was the best beer they had ever had. Enjoy the pictures below, and please feel free to comment on beer, beer labels, beer gifting, or anything pertinent. Stop by SimplyBeer to check out his wedding beer as well.  Special thanks to my pals Aaron and Josh for the help.

Pouring beer at the wedding with my brewing buddies.