Why One Beer Lover Doesn’t Love Untappd
Posted by: THFBeer_nate on February 3rd, 2011 with 27 Comments 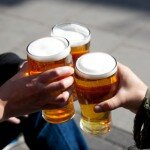 Every day it seems like another electronic, real time, internet based forum/community is born.  Myspace, FaceBook, LinkedIn, Twitter, etc., and the latest…Untappd.  Untappd is much like Twitter, but less schizophrenic in nature.  Instead of telling the world what you are doing at any given moment, you merely tell them (other Untappd members) what beer you are drinking and where you are drinking it at any given moment.

As this is a blog, and every blog is op ed in nature, I am just going to come out and say it:  Untappd bugs me.  Before I say why, let me assure you that if you are an untapd member, I think nothing less of you.  I do no think your less intelligent than the average guy/gal.  I do not think your sinister…I just don’t care if your drinking a Red Ale at John Doe’s pubs.  But my irritation goes beyond having to muddle through even more pedantic FaceBook updates (most folk link Untappd with FaceBook) than I did before.  There are two capital reasons that really are at the root of why I will never get an Untappd membership.

1)  The internet is the most capacious  revolution since the industrial revolution, and perhaps the most world impacting phenomenon to occur ever.  For all it’s glory and wonder, it has it’s flaws.  It creates bubbles of unchecked capitalism and–more detrimental–has altered human relationships.  Now, I know that social networking sites like FaceBook and Twitter (both of which I utilize) can help friends who live miles apart stay in touch.  It can create new relationships.  I’ve met and hung out with several pals who were once just profiles and avatars on these sites.  But one thing these sites have done, in my opinion, have limited the depth of relationships that friends once had, primarily by making the friendship an egocentric one.  For the most part, the point of these sites is to tell the world what YOU are doing.  FaceBook, Twitter, and now Untappd assumes that the user is the center of the relationship, and that everybody is just dying to know what your doing or what your drinking.

As a result, I…and several other sociologists…have noted that instead of having a several close friends, a person has many, many, more trivial relationships.  I’m not saying that this is you, but it may be one of your friends.  I’m not the only one who echos these concerns; check out this short clip:  Life Inc.

2) The biggest irk is that I am afraid that Untappd trivializes what, as Sean Inman from beersearchparty like to say, “the end purpose of beer is.”  That’s right, beer has a purpose, actually, many end purposes.  Id say my favorite end purposes of beer is the conversation it enhances when drink it with like minded friends.    Untappd rewards its members by drinking more and different beers with certain “badges.”  I recently looked at some of the beers that were needed to attain to a certain badge level, and the beers were pretty obscure, rare, hard to come by beers (at least around here!).  When I see, “so and so got the ‘crazy big IPA badge’ (fictional badge)  today” it seems like that Untappd update relegated the “end purpose of beer” to mere bragging rites.

Is that what beer is about?  To feel warm and fuzzy that you drank more and different beers than the next guy?  Is that why you tell the everyone your having a given brew…to let them know that they are not having it?  Now, there is a time an place for telling the world that your having a brew.  I frequently mosey over to sites like The Brew Club, Mike Loves Beer, Simply Beer, The Drunken Polack and many more (who may very well have Untappd memberships), because they let me in on the experience they had while drinking the beer in their reviews. Let me tell you, experience is a very “end purpose of beer.”  And if I’ve had the beer in review I can participate a bit in conversation.

Essentially, I feel like Untappd distracts from the human and beer experience.  Like I stated earlier, I have nothing against Untappd users or even the creators of Untappd, we just may hold different opinions.  Let’s face it…the world is full of contrasting opinions.  Even when two folks disagree over a matter, after hearing the other side, while they may not come out altering their opinion, they at least may have altered their perception and grow a bit from learning the other side.  So while we may disagree, just know that it is only out of my love for human relationships and beer, that I offer this opinion.

Now it’s your turn…let us know what you think in the comments below!