I refuse to ridicule someone for drinking “crap” beer…you know, anything brewed by a “Macro Brewery.”  Why?  First, negativity is far less conducive to communicating a better idea, and two, I’d be making fun of myself because I wasn’t just born into this idea that there are better beers out there.  I, like many others, were weaned from MGD to IPA.

That being said, I do try introduce friends and family to better beers.  Always, across the board, the number one complaint against craft beer is not that it tastes bad (although often acclamation is necessary), but that it is TOO EXPENSIVE.  And the complaint bears some validity, though at times I have been know to argue otherwise from a broader alcohol perspective.   But I get it.  I mean, I love me some sour beers.  I would drink a tongue twisting, lactobacillus born beauty everyday if I could, but I can’t afford it.

But there is a compromise, and I have proof.

The great thing is, is that Boulevard’s Pilsner isn’t a leap for the macro drinker.  When weaning a baby off powdered formula or breast milk, you start introducing whole MILK not Coca Cola, right?  So doesn’t it make sense to offer that Miler Light zombie a better tasting (yet familiar) Boulevard Pilsner that actually costs LESS than what their used to?

I am sure that keen eye can find these deals in other cities from other breweries.  I’ll tell you what I’m doing…I’m keeping these pics on  my phone, so that the next time somebody gripes, “Craft beer is just too expensive,” I’ll whip out exhibit A and exhibit B and hopefully make a convert. 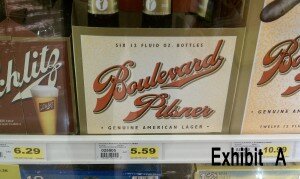