Sip With Us Saturday | Kelpie
Posted by: THFBeer_nate on July 1st, 2010 with No Comments 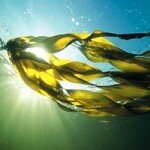 This week’s Sip With Us Saturday beer is unlike any other SWUS brew we’ve drank together, in that there is a rather strange addition to the brew:  Seaweed.  The beer, Kelpie, that hales from Scotland’s Williams Brothers Brewing Company follows the pattern of a very historical approach to their brews.  Williams may be best know for their Gruit ales, a style that forgoes hops in favor of different herbs and flowers.  You may recall some time ago I reviewed their Fraoch Heather Ale.

I have been wanting to try Kelpie for some time…the idea of seaweed in a brew is intriguing.  Unfortunately, Williams Brothers’ brews are very hard to come by around here.  Fortunately, my dad snagged some from a friend was recently up north in Michigan.  Here is what the brewery says about this ale:

Prior to the 1850′s there were many Scottish coastal alehouses, which brewed their own ales, these ales were made from local malted barley, which was grown on fields fertilised with seaweed.

This environment gave the barley a very specific flavour which we have recreated by the inclusion of fresh seaweed in the mash tun. Seaweed (bladder rack) taken fresh from the water on the Argyll coast is ‘mashed in’ with the malted and roasted barley.

Kelpie is a rich chocolate ale which has an aroma of fresh sea breeze and a distinctive malty texture.

My beer may be more unique than yours, as it was brewed in 2005…we’ll see how five years has treated it.  I understand this beer may not be available to you, if so, I’d encourage you to seek out another of Williams Brothers historically modeled beers and let us know what you think. 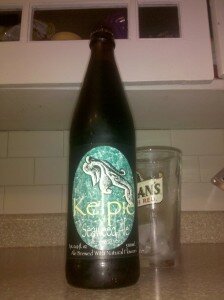