Crap Beer On A Train In Croatia
Posted by: THFBeer_nate on October 2nd, 2010 with 3 Comments 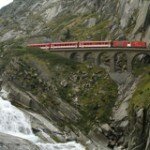 In a recent article, Mike described how the right setting and it’s ambiance can make a beer drinking experience that much better. In fact, he stated that drinking a Spaten Oktoberfest (a good, but certainly not mind-blowing beer) in Yosemite National Park made the beer one of the best he’d ever had.

As soon as I read that, I was transported back to a similar experience, and thought I’d share…

…Back in 2002 I spent a couple 0f months in the Balkans, spending the majority of the trip in Croatia.  Though the trip provided amazing, life changing experiences, the only drawback was that the group sponsoring the event forbid drinking alcohol.  No biggee, really.  I frequently fast from alcohol and find it easy to do.  However, I REALLY wanted to have a beer, namely an ethnically suitable beer while out of the states.

About a month and a half into the trip, myself and the two other guys I was staying with, were given a 3 day “vacation.”  We decided to hit the Adriatic coast, the destination being Opatija, which required a lengthy train ride from the town of Slavonski Brod where we were staying.  It was exciting…we didn’t know where we were going or what we would do when we got there.  In fact, the first night we couldn’t find a place to sleep and climbed the fence seeking shelter in a Catholic Church’s outdoor garden.

The train ride was amazing.  As the rickety vessel traversed us through lush green mountain ranges dotted with decaying castles and little farms, it occurred to me that I was on “vacation” and that certainly freed me from the chains of abstinence.  Or I was just rationalizing away my desire for a beer.  Regardless, I impetuously decided to make my way to the vending car to purchase a beer.  I bought myself a can of Ozujsko Pivo.  It was warm…no, not just warm, borderline hot, and there was no glassware provided.

The beer, a typical macro-ish lager now owned by In-Bev, foamed up when I opened it.  As I poured the liquid in my mouth I looked out the window.  As a kid who hadn’t traveled much but constantly suffered from an extreme case of wanderlust, the experience made the otherwise lackluster beer delicious, and the memory has been engraved on my brain.  If I ever find myself on a train in Croatia again, it’s Ozujsko Pivo, regardless of selection.

Click here to cancel reply.
« Will The Real Beer Expert Please Stand Up
I Guess Context can be Everything »