Making Friends Is Easy…
Posted by: THFBeer_nate on August 18th, 2010 with 4 Comments 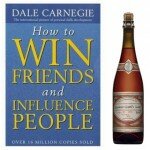 …when such a common denominator as beer is involved.

A little known fact about me is that I can be slightly introverted.  While I have no problem with public speaking, regardless of the size of the crowd, I tend to put up my guard when it comes to first time social interaction.  Nonetheless, when Bull E. Vard invited me to brew show down that he and several other Kansas City beer bloggers frequently hold in which two breweries’ similar styles of beer are pitted against each other in a blind tasting, I jumped at the chance.  Although I’d never met any of these guys in person, Bull E. Vard and Yeti (who does tours for Boulevard Brewery) pulled strings to get me (a guy they’d never met) on a booked up tour at Boulevard last December.

The event was fantastic, as were the attendees.  Seriously, as awkward as I typically feel around new persons, none such awkwardness existed with these guys.  Their approach to the beer showdown was simple and absolutely un-pretentious.  Instead of judging each individual beer down to the molecular level, the gents simply blindly taste two beers and vote for which they prefer.  There is no arbitrary scale (like “I rate this 92 out of 100 and this one 94″–as if two points is significant)…just and aye or nay.  In my opinion, this really gets to the heart of beer:  It’s less about intense scrutiny that an lead to reading into flavor profiles, and more about the overall experience you have.  The breweries that were matched were Sierra Nevada VS. Left Hand:  Two breweries whose beers I honestly haven’t visited in quite a while (I’ve been drinking mostly homebrew these days).

In the blind testing, Sierra Nevada took the win, but based off total votes for all beers combined, it was pretty close since Left Handed’s Milk Stout wooped on the Sierra Nevada Stout.  After the tasting, I got to share some brews…a homebrew sour dandelion saison, and 2010 Dark Lord.  I love sharing beer, especially one like the Dark Lord; a brew that many folks only hear about from frothing at the mouth beer geeks.  I was able to taste Boulevard’s Bourbon Barrel Quad (thanks to Yeti) and found it to be delicious.  You may recall my expressed disdain for bourbon aged beers in many a past posting on this site.

I had such a good time, and felt like I left having made more than a few friends.  I’m greatly looking forward to the next event.  Next time I may come more prepared to write down notes so I can do a more adequate job reciting the evening, but since I can hardly even remember which beers I voted for, I suggest you head on down to KC Beer Blog for a witty recollection of the evening. Have a good story of how beer saved as a nice ice breaker?  Lay it on us in a comment!