How To Keep Slobber Out of Your Home Brew (the cheap way)
Posted by: THFBeer_nate on January 27th, 2011 with 8 Comments

While in some corners of the world, spit (saliva) is a must-have ingredient when making a good brew, here in the United States we try to keep the spit out.  Saliva contains more than a few microbes and bacteria that would love to feast on the sugar in wort, or residual sugar left in a fermented batch.  Many homebrewers, like myself, like to siphon their concoctions from vessel to vessel.  In fact, if you are using a glass carboy, aside from dumping a fermented batch of beer (which would stir up yeast and defeating the purpose), you HAVE to siphon the brew.

To siphon a beer from vessel A to B, suction is initially needed to pull the beer from the vessel that has been placed higher than the receiving vessel.  After the beer has traveled down the tube further than the level of the starting vessel, gravity kicks in and pulls the remaining beer. To get that initial suction, a lot of homebrewers simply put the end of the tube hanging out of the higher vessel into their mouth and suck.  It does the job, but allows for bacterial infection.  *note* I forgot to take a picture of my own siphon set-up.  photo credit goes to http://bahua.com/bbs/.

Today, I transferred a freshly fermented beer into a secondary vessel where it will Lager for five weeks.  There was a bit (though not much) residual sugar in the beer, and I wanted to keep my slobber out.  Unlike a lot of homebrewers, I DO NOT have all the fancy-schmancy gadgets, like an AUTO SIPHON that utilizes a hand pump to initially suction the beer. I know…it’s only $10.  BUT, when you have five kids and student loans, ten bucks is a lot less trivial.

Just because I’m not willing to shell out $10 for an auto siphon does not mean that my beer should suffer.  Even for those willing to shell cash out on every brewing gadget imaginable, there are many who just haven’t gotten to upgrading to the auto siphon, as it does not come with most starter kits.  Besides, I love solving problems, so here’s how I siphon my beer from carboy to carboy without getting any slobber in it.  I bought a 3 inch tube that is just slightly bigger (like a sixteenth of an inch) bigger than the main tube proceeding from my upper carboy.  I slip this tube on top of the main tube and achieve a snug fit.  I put my mouth on this three inch tube and suck.  When I see the beer coming down the tube, I quickly pull it off and allow the beer to drain into the secondary fermenter.  It’s kind of like a homebrew condom, and I’ll bet it’s easier to clean and sanitize than the auto siphon.

There you have it.  Five cents, problem solved, and I get that warm and fuzzy feeling that only comes when you feel like you have beaten the system.  Enjoy the pics below! 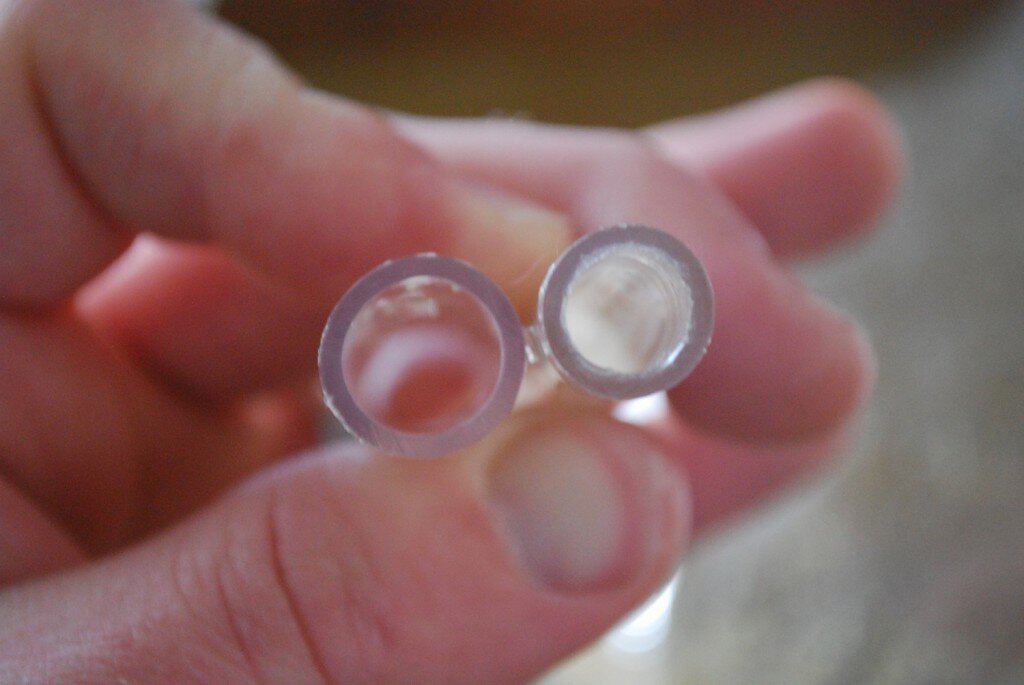