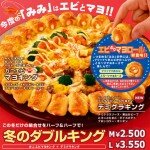 In order to fulfill the foreign language requirement in high school, I took four years of Japanese.  In fact, a the age of thirty, I still wear my Japanese Club t-shirt from my junior.  While I have forgotten most of the language (but still have dreams in which I’m speaking semi fluent Japanese…weird) I haven’t forgotten how interesting the Japanese can be, especially in the arena of interpretations of occidental cuisine.  Just cruise on over to the Japanese Pizza Hut website.  If they delivered to your neck of the woods, you could order the “Half and Half for Kids” that comes topped with “Egg Bipuru s” + “BBQ Chicken mayonnaise.”

As I’ve been exploring a new beer store (that just happens to have the widest variety of craft beer in Ohio) in search of an “island beer” to fulfill my Sip With Us Saturday tradition   I was delighted to discover Hitachino Nest XH (XH = Extra High), an ale aged in Sake barrels, brewed by Kiuchi Brewery.  Interestingly, Kiuchi traditionally is a maker of Sake; craft beer sort of evolved.

Before drinking the beer, two presuppositions occupied my thoughts.  1) This will be weird.  I mean, look what the creative (I say that in sincere admiration) country did to a pizza hut menu.  What did they do to craft beer?  2) Odds are I will not like it.  Why?  I do not like Sake.  The recollection of trying to force the stuff down my throat gives me shivers to this day even though I have not touched it in years.  Nonetheless, I was really excited to try this beer.

You can almost always judge the carbonation of a beer by the amount of “psssst” it emits upon prying the cap.  This beer is plenty carbonated.  Already my presuppositions were rumbling.  I poured the beer into my large tulip glass and was delighted to see a beautiful ruby red beer with a no nonsense three inch head that laced the glass like a traditional Belgian brew.

The aroma was packed full of sweet stuff. The first impression that my nose took away was a memory of those chocolates that are shaped like oranges that taste like citrus flavored chocolate.  But there were also woody and grassy smells, hints of nuts, chocolate, and the funkiness that I typically associate with brettanomyces.  There was not even the slightest hint of Sake in the nose.

The taste?  Holy cow.  It tastes like a fairly authentic Belgian Dubbel, or perhaps a Saison with a twist.  It is quite sweet, and candy flavored, but at the same time there is refreshingly citrus flavor.  The beer is quite complex when you push further.  I thought it had a profound almond flavor.  There is an acidic, vinegary sour flavor that really comes out after the beer sits for a while and warms, making this a tad tart.

I did not expect this beer to taste like this, but I thoroughly enjoyed it.  It was well balanced, very rooted in traditional brewing, but at the same time bold enough to remind you it’s different.  I’d pick it up if you can get your hands on it.  The lesson that I’ve been learning my entire life was reiterated by this brew:  My presuppositions aren’t always valid.

Among other Belgian Strong Ales:

Upon moseying over to the Beer Advocate to see what others thought of the beer, I saw that BA listed as an “American Strong Ale.”  Thanks for the hearty laugh, Beer Advocate.  Also, Mike reviewed this beer a while ago too.

Filed under: japanese Beer,Sip With Us Saturday