For sake of context and to reduce redundancy, the reader of this site should read the prior article that reviewed J W Lees Harvest Ale Matured In Calvados Casks.  You see, this beer is no different in recipe than the beer aged in Clavados casks.  Drinking two beers of same/similar recipe with only slight nuance in differentiation is a great exercise, as it allows the beer enthusiast to test his/her palate, as well as noting how the slightest of variations can impact the flavor.  Some times it may be taste like a complete overhall of flavor, other times it may just be an aftertaste difference.

The pour was identical to the Calvados version.  The beer looked exactly the same except, it appeared that the Sherry version was lightly more red in appearance.  I cannot verify this, though, as I drank these two beers on separate occasions.

Here is where these brother brews begin to mark their territory.  While one can tell they are quite related (mollasses, toffee/caramel, raisin, nutty aromas) there is a slightly acidic aroma.  There is an earthy aroma.  I felt that the woodiness of maturation shined through more in this case.  The sherry aroma was overshadowed by the strong sugary malt, but at the same time the vinous white grape aroma was intriguing.

Absolutely delicious!  Again, the entire DNA present in the entire family of J.W. Lees Harvest ale reminds you that you are indeed drinking something familiar, but the Sherry aged version manifests different qualities.  The nutty flavor is not coconut reminiscent, but reminds one of walnut.  The nuttiness is a bit bitter.  At the same time, I found this beer to be a bit less sweet in character, and the sweetness had less liquor qualities and more fruity qualities.  There were tastes of dates, grapes, and even a remote apricot flavor.  Like the rest of the family, it tasted like a dessert–just not a macaroon.  If I were to compare it to a dessert, I would choose pecan pie.

Deliciously sweet;  a must have try beer!  I must say, while I cannot adequately put my finger on it, enjoyed the Calvados version better.

Among other Vintage Ales: 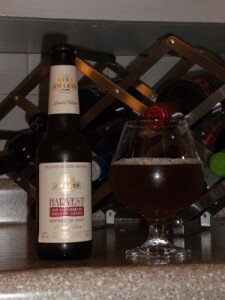