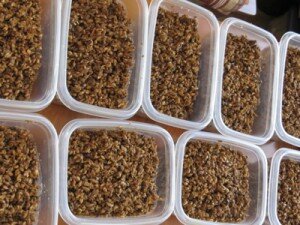 Landfills.  On the drive from Kansas City to Indianapolis, Andrea and I always pass a landfill just East of East Saint Louis.  Invariably, white birds fly contrastively over heaps of human waste.  Green hills jut out of the otherwise flat landscape and appear fertile, despite the underlying material.  It’s always a notably strange site.

I won’t go into a tirade about consumption and waste.  I won’t, in fact, dispute that landfills are a perceived necessity of modern life.  However, I will point out that none of us would want to live directly adjacent to one.  Be that as it may, I’m constantly rethinking how to escape the learned behavior of simply “tossing it out,” as though-it-goes-nowhere mentality.

As most of you know, Nate and I are avid brewers.  So much so, that we are starting a brewery.  A while back, I thought about my brewing grains.  I sat and wondered what happened to them when I threw them out.  I could only make a limited amount of spent grain bread.  Well, I had to put them in a bag, put them in the garbage, wait for the trash truck to pick them up, and sent them to become methane in a landfill.  There had to be another way.

Luckily (really by choice), Andrea and I frequent our local farmer’s market.  There are a myriad of reasons we buy local produce from local producers.  Mainly we like knowing the people who sell us our food and love our local economy.

At our local farmer’s market, there are a few people who sell meat…which is awesome, by the way.  Of course, many animals love spent grains, and it was a natural choice to start looking into off-loading some grains to some farmers in the area.  First, it reduces some of their feed costs.  Second, it keeps my grains out of the landfill. Third, I might score some free eggs or chops now and again (they brought me some pork sausage a couple weeks back).  Fourth, it adds a direct connection to my food supply.  Other reasons could be noted.

Why all the hubbub, bub?  Trust me, this isn’t an attempt to make you go green or assume my position on an aerie while looking down on anyone.  It is an appeal.  Please believe me when I say that someone wants your brewing grains.  Even if you are in an urban area, there is a lot of farming happening.  Find someone to take your grains; you are going to get rid of them one way or the other.